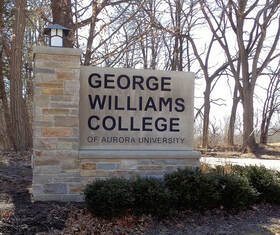 The Ferro Pavilion is located on the lovely campus of George Williams College of Aurora University that hugs the shores of Geneva Lake.  It was built in 2008 replacing two prior structures - (1) the Lewis Auditorium which stood on the same footprint from 1890 to 1999 when it was razed because of disrepair and (2) the Allyn Pavilion constructed in 2001 which lacked the additional seating desired, did not have good acoustics, and needed required accessibility.  It has been stated that the tensile structure was inspired by the famous Benedict Music Tent at the Aspen Music Festival.

It was designed by Hammel, Green and Abrahamson of Milwaukee, WI, and constructed by Scherrer Construction of Burlington, WI.  The cost of the pavilion was $1.5 million and funding started with a $500,000 leadership gift from the Ferro Family Foundation.  Contributions for the remaining were raised from more than 130 individuals and groups.    Pavers in the Allyn Plaza and many plaques surround the pavilion honoring those who donated.  It was dedicated in July 2008.

Music by the Lake, an annual summer event, offers a terrific lineup of great live entertainment from June through August, a "Sundays at 4" complimentary cultural series, and also hosts the George Williams College annual commencement.  Audiences not only sit under the roofed canopy but spread out across the grounds on blankets and lawn chairs to enjoy the performances.
Many plaques surround the pavilion area and honor many of the patrons and benefactors who made it possible.