City Park West Bandstand
In the 1920s, Helen Benishek-Tradewell designed City Park West and the charming bandstand within it.  Ms. Benishek-Tradewell  grew up in Antigo, studied landscape architecture at UW-Madison, and returned home.  She is possibly the first female landscape architect in Wisconsin.  The four-sided charming bandstand structure has a raised platform and is enclosed with white fencing around the stage area, and the detail at the top of each column is reminiscent of a Scandinavian style.

​In 2008, the bandstand underwent a renovation which was designed by Mudrovich of Wausau, WI.  During the renovation, new steps were installed and new landscaping surrounding the bandstand was added.  Commemorative bricks that were engraved with donors' names along with their messages are placed on the bandstand stage.  An accessible ramp was included at this time.  In  2011, additional ADA walkways were completed in the park, and in 2013/14 railings on the south stairs were added.  Volunteers assist with the landscaping and maintenance.
Every summer, concerts are held on Monday and Thursday evenings starting in early June through August.
​​
Other events include weddings, church services, and it is used as a  backdrop for photo opportunities.
​ 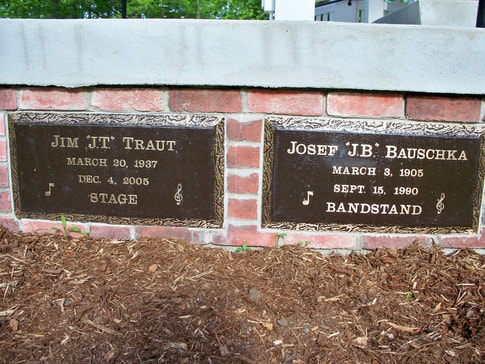 At the site, there are two plaques honoring Jim "JT" Trout and Josef "JB" Bauschka.  JB was the Antigo High School Band Director from 1929 to sometime in the 1960s; JT became Band Director until the early 2000s.  The original bandstand is dedicated to JB and the new performance stage to JT.