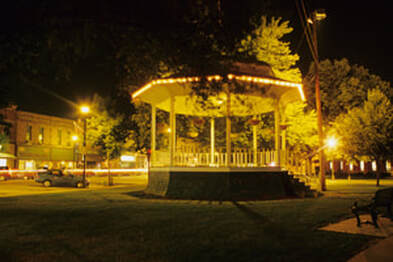 From website Chamber of Commerce: https://waupacamemories.com/do/history/
In the downtown square in Waupaca, a bandstand was built in 1898 for an approved amount by the Common Council of $275.  It was mainly built for the Carroll's Band and Wright's City Band who played there.  It lasted for many years, and was slated to be torn down in the late 1990s.  However, after the old courthouse had been razed in the early 1990s, residents objected to more demolition of old structures.  It was therefore restored and added to the Waupaca Register of Historic Places in 1997.

In the past, it has been used for speeches by women's suffrage group, welcoming home troops, and in 1980 Ronald Reagan spoke during his presidential campaign.  It is decorated for the 4th of July in red, white, and blue and during the Christmas holiday season, holiday lights and trim adorn it.
The Waupaca City Band played band concerts for over 100 years at the bandstand but recently relocated to another site.
At the downtown square site, near the bandstand, memorials have been erected
to honor veterans of WWI, WWII, and Vietnam.