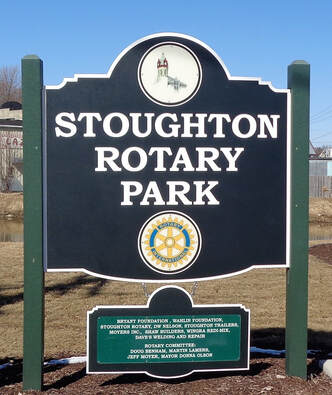 3/14/2018
​Norwegian heritage and culture are enmeshed in the City of Stoughton, so when Mayor Donna Olson traveled to Stoughton's sister city Gjøvik Norway in May 2011, it was no surprise that she was inspired by it to create Rotary Park which is home to the Gazebo Musikk.  There were small pocket parks throughout Gjøvik, and in Stoughton, there was a green space (albeit slated for a parking lot at that time) next to the fire station just waiting her magic touch.  With the help of then Fire Chief Martin Lamers, Planning & Development Director Rodney Scheel, and the Stoughton Rotary Club, the idea took shape.  The Stoughton Rotary raised all the funds needed (estimated at $86,500) and established a committee to coordinate the building of the gazebo and a brick area around it.  The committee consisting of Doug Benham, Martin Lamers, Jeff Moyer and Donna Olson oversaw the project and designed of the gazebo.  Many others including the Bryant Foundation, Wahlin Foundation, DW Nelson, Stoughton Trailers, Moyers Inc., Shaw Builders, Wingra Redi-Mix, Dave's Welding and Repair contributed to the funding and in-kind labor.

The design includes "dusk to dawn" lighting which shines throughout the night at the top of the three-tiered gazebo.  A brick apron surrounds the Gazebo with seating for all.  A water fountain was added, not only for people, but for their dogs.

​Although originally designed for entertainers to face away from the sun, it was reversed when audiences attending placed their chairs and blankets on the hillside -  bands and other entertainers then turned towards them, thus facing the sun.  However, it has not deterred any of the musical artists, who enjoy playing in this venue.
Since 2014, the City Parks Department and the Friends of Gazebo Musikk
​have arranged 14 musical concerts every Thursday evening during the summer.
​
Additionally, on the Thursday before the 4th of July, the "Catfish River Music Festival" is presented, which is a fundraiser for the Stoughton Opera House.  However, 2020 was cancelled.  (The Catfish River was renamed the Yahara River in 1855.)
During the winter holiday season, the Fire Department and former Fire Chief Martin Lamers host an explosion of color with holiday lights displayed in Rotary Park and Gazebo Musikk, which is synchronized to music such as the "Nutcracker Suite".  Drivers can easily listen to the music and watch the lights change to each note of the songs via their radios.  Martin Lamers has created the holiday light display and adds something new each year. This event is supported also by donations from the community. 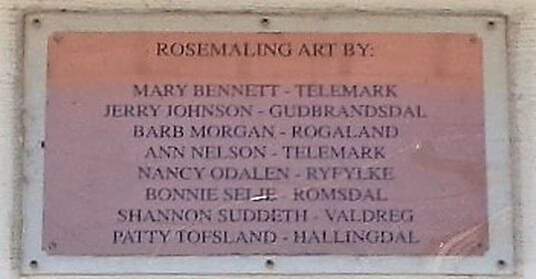 3/14/2018
​A highlight of the Gazebo Musikk is the painted rosemaling panels placed inside the bandstand between the eight supports.  They represent eight different styles of Norwegian rosemaling.  Plexiglas coverings protect them from the elements.  The art was created by eight artists who are members of the Wisconsin Rosemaling Association located in Stoughton.

​Rosemaling is a Norwegian type of decorative painting which was brought to Wisconsin by Norwegian immigrants.  It is even noted that the 2014 Academy Award winning Disney movie "Frozen" was influenced by this type of art.