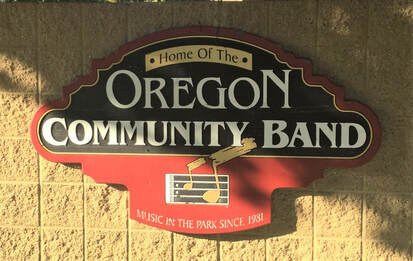 9/24/19
​The Oregon Community Band has been playing music at this park site since 1981.  The current structure was built about 1990 on the cement slab that was the base of an original two-story bandstand from the 1920s.  This bandshell was designed by Jeff Groenier of Concepts in Architecture, Brooklyn, WI.  Particular attention was paid to the design in order to enhance the acoustics of music.  The ceiling pitch slopes from back to front to project the sound forward. 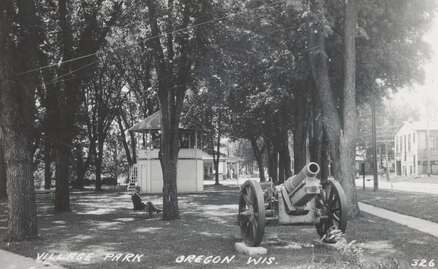 The original bandstand; courtesy of the Oregon Area Historical Society.
From the Oregon Area Historical Society:
​
​This 1915 photograph depicts the wooded area directly across from the Pump House, now known as Waterman Park.  At that time, there were many more trees.  Several were sacrificed for additional parking. The gazebo was eventually replaced with a larger band shell for the Oregon Community Band, and the canon was relocated. The man sitting on the bench is Gilbert Gilbertson.

This earlier canon was a field gun built in 1918 and  on was sent for the scrap metal drive in World War II and was later replaced with another World War II canon. 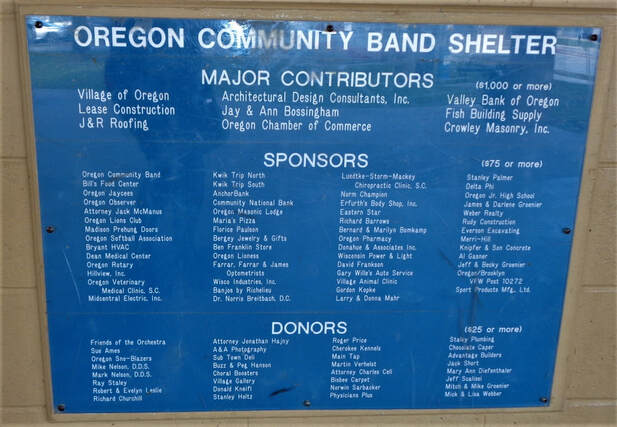 ​The community, including the Village of Oregon, stepped up and donated the needed funds for the bandshell.

The Oregon Community Band plays regularly on Tuesdays during its Summer Music in the Park concerts.
The Chamber of Commerce hosts additional musical entertainment.
​Over the years, it has also hosted Community Band Festivals.