The bandstand is located centrally in Saukville on what was originally Market Square, and according the Saukville Historic Society, was used for public functions such as circus performances, baseball games, horse racing and monthly Cattle Fair Days.  It was later named Triangle Park because of its shape, and in 1998 it was renamed again Veterans Park.

The bandstand was built of concrete in 1924 by the Concrete Products Company, with William M. Schmit, proprietor.  Renovations have occurred in 1981 and were sponsored by local businesses and individuals.  Again in 2003 additional renovations were completed in memory of Mr. Schmit by the Frank L. Schmit Family at a cost of about $11,000.   These renovations consisted of electrical upgrades and other repairs.

The bandstand is "open air" and has a multicolored covering installed over it during the summer.  Large global lighting are at each of the eight corners giving it a distinct look.

Over its lifetime it has been used for musical events.  It has also been used to show free movies, to host weddings, and in the past to hold services for Memorial Day and Veterans Day.  It is "No. 31" on the Saukville Historic Walking Tour.  During the summer months, "Live at the Triangle" offers musical entertainment every Wednesday evening. 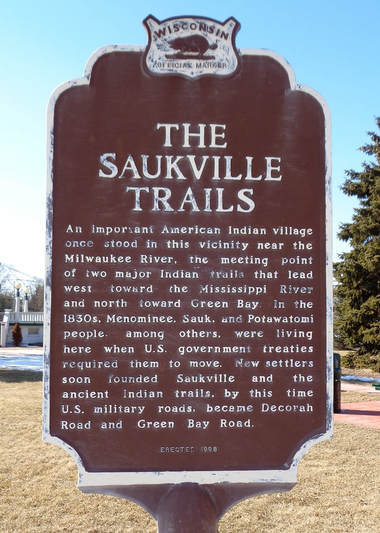 Saukville was the crossroads for several Indian trails, one leading to Green Bay and another towards the Mississippi River and is noted on Wisconsin Marker by the park.  There also were Menomonee, Potawatomi, and Sauk people living in the area.  The trails became military roads connecting forts in Chicago, Green Bay, Decorah (on the Wisconsin River) and Sauk Harbor (now Port Washington).