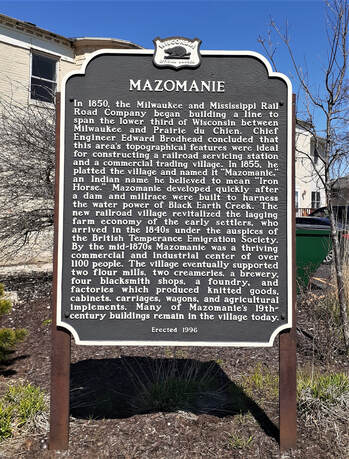 
​The  School of Architecture at Taliesin chose Mazomanie as their community project for the 2018 Summer Immersion Class.  The design chosen, named  "Dancing Gables", was from Frank Corridori, a student from Columbia, Missouri.   The students had studied Mazomanie history and viewed the Downtown Historic District for design inspiration. 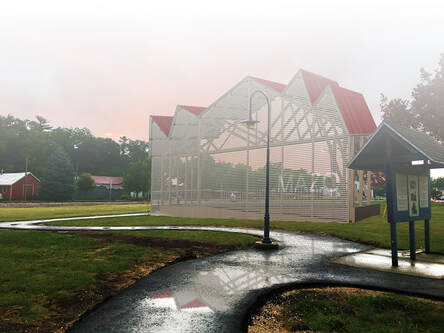 Rendering of completed project from SOAT Immersion student Frank Corridorii
From PLAIN DESIGN BUILD:
​
"The Mazo Bandstand provides a permanent venue for Mazomanie’s emerging performing arts program. The project was designed as part of Taliesin Summer Immersion program of 2018 in collaboration with the town of Mazomanie in Wisconsin. The siting of the bandstand on the southern border of the Mazomanie / Madison railway draws on the deeper ties of both the railroad and long the standing tradition of festival arts in the region. For many years the town has supported the Gandy Dancer festival as part of a long tradition travelling performers in the Midwest. (Mazomanie was original home of the Ringling Brothers)."  Jason Griffiths and 2018 SOAT Immersion students

The form of the building emerges from our collaboration with local truss manufacturers Wicks Building System. The structure offers an adaption of a typical agricultural truss that manners the “web” and “cord” language and by adding elements to support the roof. This building then draws together associations between gable roofs of local houses, railroad sidings and ventilated walls of local grain barns.

​
“The idea being expressed in this design brings together the colorful peaks and gables of the downtown architecture into one playful, dancing roofline. The asymmetric peaks and valleys are meant to evoke the feeling of motion, dance and music so closely related to the function of a bandstand and public gathering space. The site, and the bandstand are meant to be a place of joy. The visual expression of a roofline dancing like notes upon a page expressed in this design pay homage to the past in the mirrored form of the local gables, while foretelling the type of kenetic sound, music, joy, and revelry that will occur under those gables in the future. These visual cues, and their relation to joy also help to inform visitors of the intent of the site, and structure. Secondary to the inspiration that the gables provided us is the town’s strong ties. with the railroad. The structure of a train platform is reflected in the design of the cantilevered roofline which overhangs a low, platform-like stage – much like the form of a railroad siding.”   Frank Corridori – 2018 Summer Immersion student
Jeffery Wirth, local Mazomanie resident, led the fund raising effort of $30,000 in private donations for the project.  Construction began in February of 2020 and has paused during the COVID-19 pandemic.  It is expected to resume once the Safer at Home ends.
FORMATION OF THE WESTLAND PROMENADE 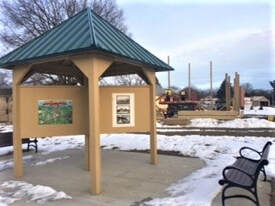 3/4/2020; A kiosk is located at the western entrance of the Promenade; on each of the four sides, local history is told along with photos of the area.
The Performing Arts Pavilion is located in the downtown Mazomanie Westland Promenade and is adjacent to the railroad tracks that cross the Village.  The Promonade is named after Fred Westland, a native of Mazomanie who generously donated $250,000 for its development along with a contribution of $25,000 for annual flora, and five year's worth of maintenance costs.  Mr. Westland dreamed of contributing back to where he grew up for many years; he was a successful businsessman in real  estate and the oil business.

The park development became a serious idea in 2006.  Originally, its site was considered an eyesore with a little used 300-foot rail spur.  Along the way to park creation, many hurdles were encountered.  Several times, the project was thought dead.  Led by Village President Jeff Wirth and local developer Dan Viste, there were many negotiations with the WI and Southern Railroad (WSOR).  Efforts to make the dream a reality also included help from State Sen. Jon Erpenbach, the State Dept. of Transportation, the WI River Rail Commission, and Attorney Tony Varda who volunteered his time.  The rail spur was relocated, thanks to a donation of land by Robert Schlytter; liability insurance issues were overcome; and a WSOR demand for a fence 33 feet on either side of the railroad was retracted. All is detailed in Westland Promenade.  By the end of the summer of 2006, the Village agreed to all.

In the spring of 2007, construction of the park began.  Architect Pat Cleary of Vierbicher had been hired to prepare the plans for the entire downtown and rail corridor area including the park (the original plan called for a gazebo which could be used as a bandstand).  Several changes occurred before the final plan was done.  The planning process was funded through a Dane County Better Urban Infill Development (BUILD) Program.  The park was dedicated on July 1, 2007.