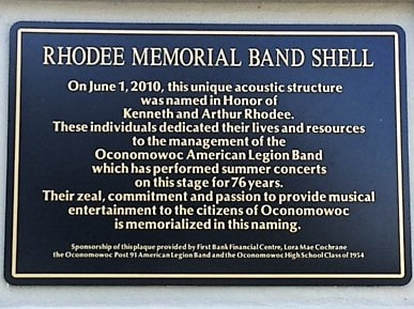 2010 Dedication Plaque
HISTORY OF THE BANDSHELL

​During the Great Depression, public money was used on projects to give citizens employment and to improve communities. The bandshell was one such project, and in 1933, it was built by the Public Works Administration, administered by the Civil Works Administration and the Federal Emergency Relief Administration (FERA) at the cost of $7,000.
​
Dedication of the bandshell was July 25, 1934.  St. John's Military Academy Summer Camp Bands from Delafield was the main performer and was led by Col. Vesey Walker, of Milwaukee, who later directed the Disneyland Band.  The American Legion band also played. (information from a story in the Oconomowoc Enterprise, July 19, 1984: "Anniversary Concert is July 25 by Legion Band").

In 1972, the city council approved contracts for the construction of an extension to the city park band shell platform; construction  cost was $2,957 (from Oconomowoc Enterprise,  June 8, 1972, "Work Gets Go Ahead").

In 1984, the city celebrated the 50th anniversary of the bandshell and was it was refurbished. (from Waukesha Freeman, June 13, 1984, "Band shell turns a graceful 50"). The Legion band was celebrating its 60th year and played, starting with "America the Beautiful" and ending with Sousa's "Stars and Stripes Forever". (from a story in the Oconomowoc Enterprise, July 19, 1984: "Anniversary Concert is July 25 by Legion Band").

In 2010, the Band Shell was dedicated to Kenneth and Arthur Rhodee who had dedicated themselves to the management of the American Legion Band.