City Park Gazebo Bandstand
The Gazebo/bandstand currently in City Park is the third one, built in 1992.  The first one was believed to be constructed before 1900 and removed in the 1940s.  The second one, a concrete stage only, was thought to be built in the 1950s.  Durrant Architects designed the Gazebo and it the cost was $50,000-60,000. 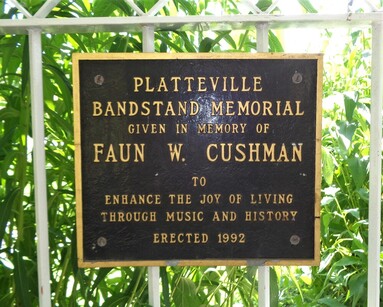 From the City of Platteville Department of Parks:  “The new bandstand is principally a gift of the Jeffris Family Foundation of Janesville.  Thomas Jeffris made a gift to the City in 1991 for a historic preservation-type project."  The document further reads "The City is now seeking additional funds/donations to complete a quality band stand project. A Substantial memorial for Faun Cushman was received in January to kick off a fund drive. Mr. Cushman played in the City Band for a number of years and members of his family are also interested in historic preservation. Donations to the “Faun Cushman Band Stand Fund” can be made to…”
Today the Gazebo hosts Thursday evening weekly concerts, "Music in the Park".    A variety of free music is offered.  Other park events include veteran events including Memorial Day and the 4th of July.  The Gazebo has also been used for private events, such as weddings. 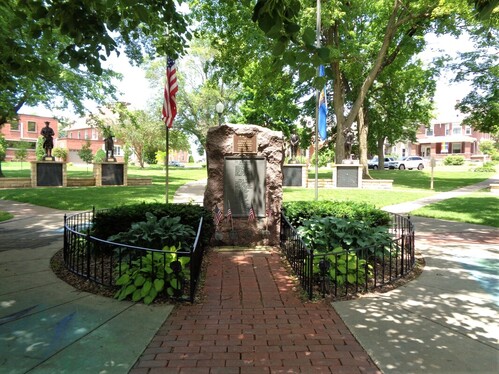 As a tribute to veterans, statues of them on pedestals from all the US wars encircle the center of City Park.  At one side there is also a statue honoring first responders.