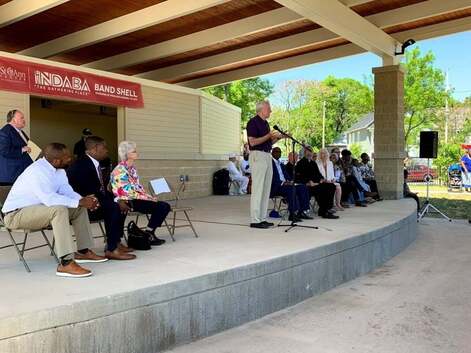 6/7/2019; Milwaukee Mayor Tom Barrett at the dedication of the Band Shell from https://patch.com/wisconsin/milwaukee/community-celebrates-new-spaces-st-ann-center
​What does the name Indaba mean, you ask?  According to traditional African culture, Indaba refers to a gathering to resolve issues affecting the village, where each individual has a voice and where there is a common story created for all to share after they leave.

​On June 7, 2019, a "Completion Ceremony" for the Indaba Band Shell was held. This was the culmination of much work by a partnership between Parklawn Assembly of God and St. Ann Center.  Both had recognized that a change was needed in the troubled area in which it was located.  This neighborhood has suffered a 42% poverty rate, a male employment rate of only 36%, and incomes less than 27% of the area median income.  To help improve the area, a survey of the neighborhood was conducted and one thing that emerged was the desire for a safe gathering place.  The partnership wanted to provide a neighborhood, rich in talent but lacking in opportunity, this safe place.  That idea for the Bucyrus Campus ground morphed into the creation of a band shell as part of the improvement.  Soon a Band Shell Committee was created and had suggestions about it from hours of operation to design to appropriate type of entertainment.  It raised $30,000 of initial operating support.  On August 11, 2017, a Good Earth Celebration was held to hail the start of construction on the 7.5 acre site.  The band shell was well on its way!

The architect was Doug Barnes of Zimmerman Architectural Studios; funds to construct the Indaba Band Shell came from a capital grant from the State of WI in 2017.  The cost was $287,000 which also included construction of a two-block tree-lined lighted walkway leading to it.  The Shell also includes bathrooms on each side of the structure, storage, plus two "green" rooms.   On both sides of the stage, accessible access is offered. 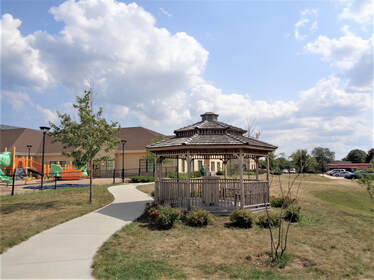 8/5/2021; Outdoor Arbor/Tiki Gazebo donated by Jacqueline Her-Barber & Michael Barber
​An additional feature on the path to the Band Shell is the Outdoor Arbor/Tiki Bar Gazebo which has been used for various things.  One important event for the community was providing the COVID-19 vaccinations through a program with the local National Guard.  Another is a "Free Refreshment Friday" program during the months of May and September.  Snacks and beverages along with information about St. Ann Center's services are offered and during this time and community members may take a walk around the entire facility - it's a third of a mile long!  This September, chair yoga exercises during the morning have been added for St. Ann clients and neighbors.   ​ 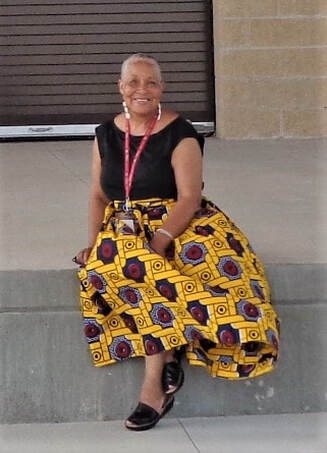 Beginning in 2019, Gloria Miller, Special Events Director for St. Ann Center, worked with Milwaukee United Performing Arts Fund (UPAF), a nonprofit organization that brings performing arts to new audiences to bring local talent to the venue.  In February 2020, the first Indaba African Ball kicked off Black History Month in order to raise funds to help support payment to local artists for the summer of 2020.  While a great success, it was stymied by the 2020 COVID-19 pandemic which cancelled any performances.  The 2022 Indaba African Ball was held while the 2021 Ball was virtual.
​
The Indaba Band Shell is indeed a welcoming vibrant neighborhood gathering spot living up to its name, Indaba.
​Performances offer a variety of talent and acts which range from African Dance to Latin American music to ballet to opera to a symphony orchestra to Black Theater.

​A concrete apron in front of the stage offers space for people in wheelchairs to easily enjoy the shows and/or for others in the audience to dance.

The bandshell is also available upon request for private events, such as wedding photos.
The St. Ann Center for Intergenerational Care opened in September of 2015.  A successful capital campaign and a $5 million grant from Wisconsin’s capital budget, received in 2017, allowed St. Ann Center to complete the $28 million, two-story, 80,000-square-foot facility.  It has created a vibrant campus which includes not only child care and adult day care, but has an indoor aquatic center, a state-of-the-art dementia care wing, an overnight respite care unit, an art studio, and a beauty salon.