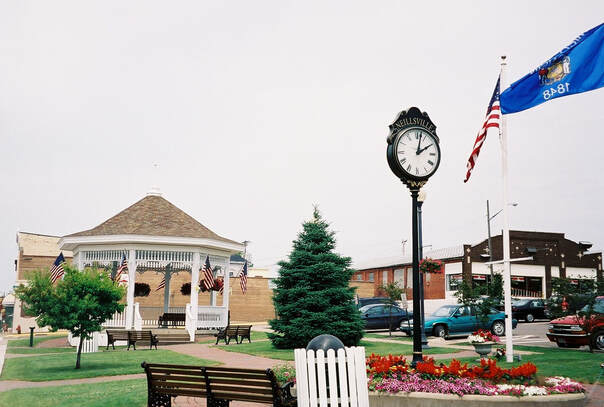 
​
​
​
At one time the bandstand was used for concerts.  Now, the bandstand is used as a choir stand for the Christmas tree lighting, for Christmas season downtown events, Fall Fest, and for announcers' podium at parades.
The Downtown Square Park is named after Charles C. Sniteman who came to Neillsville in 1879 from Peoria, IL.   Sniteman came to Clark County because his doctor advised that going north would help his malaria.  He had previously attended the Philadelphia College of Pharmacy.  When he arrived in Neillsville, he worked as a pharmacist at the Henry Meyer Drug Store and within a short time bought out the business.  It is reported that he invented a fly spray used by farmers and a "blue ointment used in lumber camps to repel lice".  The C.C. Sniteman Drug Store is in the Downtown Historic District of Neillsville.

The City of Neillsville was chartered in 1882.  Sniteman was involved in many of the early businesses promoting the new City – Neillsville Furniture Company, the Lighting Company and canning factory.  The Sniteman Pharmacy is still an active business today.  Mr. Sniteman died October 28, 1940 at the age of 91.  His 1915 home is on the National Register of Historic Places.