Village Green Bandstand
The Ripon Village Bandstand was built in 1992 after the creation of the Village Green Park.  The land upon which it sits was donated to the City of Ripon and Ripon Main Street, Inc. by Valley Bank.  Doug and Audrey Lyke, prominent civic-minded residents and past owners of the Ripon Commonwealth Press Newspaper, donated the funds for its construction.

Rick Schroeder, who specializes in vintage and historic building restorations, remodeling and adaptive building reuse, was the designer of the wooden structure.  William "Billy" Hutton was the contractor.  He was a part group that advocated the concept of having the bandstand as a part of a central public space in close proximity to Historic Downtown Ripon.  The bandstand is unique, unlike any seen in WI, in that it has with wide steps leading to its performance stage on three sides with handicapped access on the fourth side. 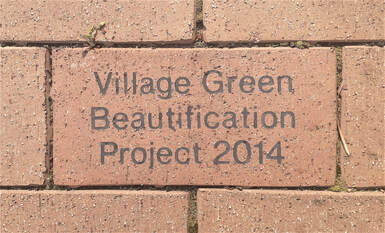 5/14/2021; one of many engraved bricks recognizing donors and line the path to the bandstand.

​There was no dedication/ribbon cutting at the time - possibly because there was pressure to get the first season's concerts underway as soon as possible in the spring/summer of 1993.  The Ripon Rotary Club, among other groups, has supported upkeep and improvements to the bandstand and the Village Green Park over time.  The handicap access to the bandstand from the next door parking lot was made possible by the Rotary Club.
​
​In 2021, the Ripon Summer Concert Series is scheduled after not having any during the COVID-19 pandemic in 2020.  During any summer season, there are usually about 11 to 12 musical events which are held on Friday evenings and free to the public.  The concerts have been extremely popular with audiences which number anywhere from 500 to 1,500.  A variety of artists are featured including rock, jazz, and country.  Horicon Bank, once again, is the sponsor of the concerts.
A special thanks to the Ripon Historical Society for collecting and sharing much of this information.