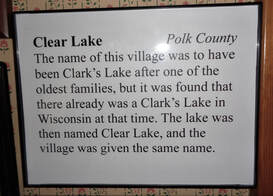 5/31/2019
The Clear Lake Bandstand is local landmark and located centrally in the small village.  It sits on a flat-iron shaped lot which was purchased from Mrs. Olmsted by the Advancement Club in 1923 with the intent that a bandstand be built.  The Advancement Club was a group of local businesses.  Sadler and Pearson Construction built it in 1923; local fieldstones from nearby farms were used.  Not much has changed since 1923 - only the removal of some pines and the painting of the brick columns along with the cement toppers of walls and steps,

The bandstand was used  in the past for concerts and recently ice cream socials were held there.  It is now occasionally used for events, such as weddings and talent shows.
Other Clear Lake History 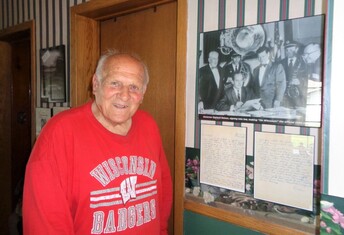 5/31/2019; Local historian, Charles Clark, with the photo and the signing of the law making "On Wisconsin" the official state song.
Charles Clark, local historian and baseball fan, fondly pointed out two famous native sons from Clear Lake, both great friends of his.

First, Gaylord Nelson's (former WI governor and US Senator - founder of Earth Day) childhood home is nearby, across the road from the bandstand.  In July, 1959, Gov. Nelson signed into law the measure that made "On Wisconsin" the official state song.