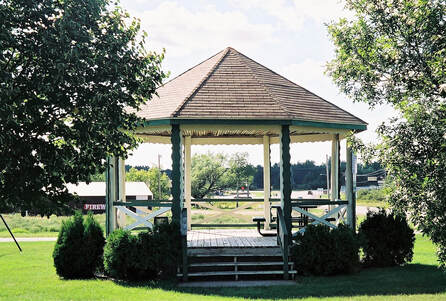 8/26/2005
The Gazebo is located in Gazebo Town Park; a sign on the bandstand (Gazebo) reads "Given to the people of Florence".

In 1985, the Florence County Historical Society received a generous donation of $4,500 from Mr. and Mrs. Philip R. Jeuck, Jr., of Mount  Prospect, IL, to replace the older 1916 bandstand at the town park. Mr. Jeuck had been a summer residents for over 60 years and the bandstand was one of his fond memories.  The town granted permission to have this done.

The original bandstand had been constructed in 1916.  According the the Florence Mining News, October 2, 1985, "Construction of the original bandstand began on June 26, 1916, through the efforts of Felix A. Vogel, general manager of the Florence Iron Co.  He sent a crew of carpenters from the mine under the foremanship of Jacob Jausermann to work erecting the shell in hopes it would be complete for the 4th of July celebration...it was not used during the Independence Day activities.  The first record of the bandstand's use was on July 23, 1916, when Our Young Fello's Band gave a pleasing and thoroughly enjoyable concert to several hundred people.  Under the direction of the H.R. Siedel, this local band, consisting of six men, frequently played for activities in Florence."  In an article from September 1985, "In early days, many band concerts were given in the park.  The entire community thronged to hear the music from local bands.  Memorial Day parades started at school and moved to the park, where the speaker of the day reminded people of the price of freedom.  Later, the band and schoolchildren traveled to the local cemeteries to distribute flags and bouquets of flowers."

The Florence County Historical Society supervised the construction of the 1985 bandstand which was built by Ernest and Mark D'Agostino of Commonwealth.  It kept the same size and details of the original along with the use of treated wood.  In 2009 the town hired a contractor, to do painting, staining, vent installation and replaced wood boards with log posts and railings at a cost of $950.
The Florence County Chamber of Commerce in past years has sponsored  "Music in the Park",
However, none is planned 2022.