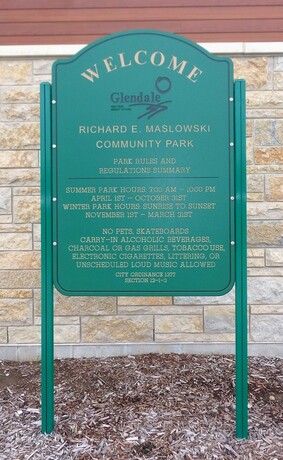 6/21/2018
The Johnson Controls Community Amphitheater, was built in 2016 and opened in 2017.  It is located at the Richard E. Maslowski Community Park, a newly created park on a former landfill.  As the Glendale city administrator for 37 years, Mr. Maslowski had always wanted to build this park.  After his retirement, he saw his vision come alive and was able to attend the ribbon cutting.  The Amphitheater offers seating for 450-500 on a tiered lawn.  Kahler-Slater acted as architects.

The origin of the amphitheater was developed by Mr. Maslowski who realized how inadequate the current mode of offering music was.  The original stage was an old semitrailer and wooden platform forming a stage and it required a lot of work by city staff to set up each time.  Additionally there was no electrical or sound available and this stage was deemed dangerous to use.

The City explored many options for the location, and in the end, decided that an amphitheater along with additional park features would be best at a new site.  The other features included a handicapped accessible play ground, baseball diamonds, community rooms, veterans memorial, and a beer garden.

The Common Council approved $850,000 from its 2015 Capital Improvement program to start the grading for the park and adding a new roadway leading to it.  The rest of the cost was estimated to be $1,900.000 with funding initially coming from a 10-year bond with the idea of paying this off with philanthropic donations.  Many businesses rose to the occasion and sponsored various parts of the park.  Johnson Controls donated $900,000 for the construction of the Amphitheater.

Currently, the free Music in the Glen Concert series is from late June into early August, is hosted by the City of Glendale and sponsored by local businesses and citizens.
Other possible concerts are posted at the city website. ​
In 2020, Due to the COVID 19 pandemic, the 2020 concert season was cancelled.
​