Franklin Else Memorial Bandstand
Many summer concerts are scheduled at the Bandstand; each concert is supported by various groups in the community.
​During the summer of 2020, only two concerts were held - July 29 and August 12.   All were weather permitting and with social distancing due to the COVID-19 pandemic.
The June 6, 2018 Program 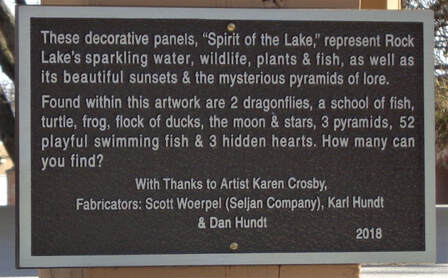 ​
​Besides the talented Lake Mill City Band, the other "pièce de résistance" is the artwork created by Karen Crosby, a local artist, who designed 12 panels that embrace the stage of the bandstand.  Named "The Spirit of the Lake", they are made of powder coated steel and have cutouts, reminiscent of paper cutting, that reflect the life forms of Rock Lake.  Here are just a few of the panels.