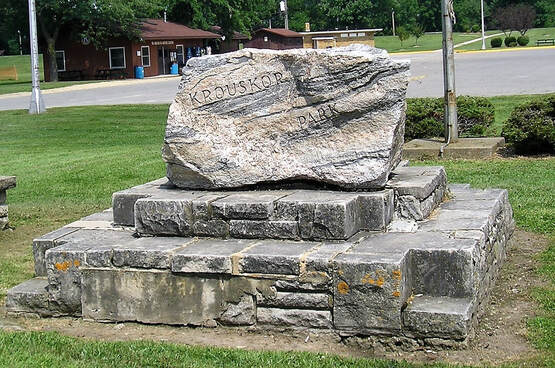 A dream was turned into action and resulted in the creation of the Joan Woodman Orton McCollum (JWOM) Pavilion.  Paul McManawy along with Bernadette Maglish and Rich Neumann led the way.  The project was not to be only a Pavilion where the community could gather for musical performances, but also a tribute to US Veterans with all to be located in Krouskap Park. 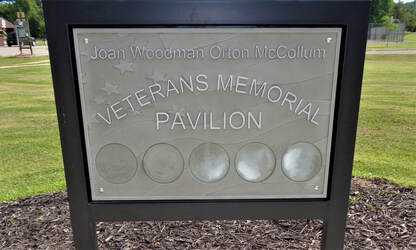 8/6/2020
​Thoughts from Paul McManawy:
Pardon me, as I wax somewhat emotional. Today the weathervane, a beautiful eagle in flight, was mounted atop the just completed Joan Woodman Orton McCollum Veterans Memorial Pavilion. Pictured are but a few of the many volunteers who have poured heart and soul into this project, completing it in record time. Incredibly, it was just a few short months ago I decided to act on an idea I'd been nursing for some time, that being to build a gathering place/performance venue in a park setting where families could come to be entertained by their neighbors as they enjoyed a picnic lunch in the park. I envisioned it as a lovely addition to the Aquatic Center to be built just over the bike path. I called together a committee comprised of me, my wife Jean, Bernadette Maglish and Rich Neumann. One session in our living room, and we were off and running. That was in March. The pavilion is up and paid for 5 months later! I have no words that could adequately express my appreciation for the hard work and dedication of that committee. Endless hours knocking on doors, presenting our idea and refusing to be dissuaded. The original design I presented has grown into the beautiful memorial you now see in the park. Flag poles, new plantings, benches, memorial stones . . . . why? . . . . the astounding generosity of donors. Business people, individuals, organizations, foundations. I love this little city and her people. There is NOTHING the citizens of this city cannot accomplish. NOTHING! My heartfelt thanks to the many who have made my dream come true. YOU are what makes this little city so special. YOU make it great. Thank you!!

Thoughts from Bernadette Maglish:
Paul how amazing that your idea to build a gazebo in the park, after that one meeting, blossomed into a Pavilion, then a Veterans Memorial Pavilion. Then it sparked a community to see it through to the end. Volunteers who gave of themselves on a daily basis to assure it's completion was heartwarming. Sponsors who believed in the end result. This wasn't a structure in the park, it was a Living Memorial to honor our Veterans and their sacrifice. I met and established many new friends that I am eternally grateful for. For those of you sitting on an idea or dream, know that you live within a community where your dream can come true. Share that idea with others as Paul did…The smartest people around you, will never be the scholars. The smartest people are those who know what they DON'T know and ask for help. We live in a community where help is ALWAYS on the way. I will continue to be grateful and thankful for this experience and the change it has brought about in so many lives. It gave hundreds of people an avenue to give back. This wasn't a committee project it was a community project! Richland Center... YOU DID IT! To all Veterans, THANK YOU FOR YOUR SERVICE! Only the BEST for our Veterans.
Groundbreaking was June 7, 2018; the dedication was August 18; and the first community band concert was September 8 with Eric Brewer, UW Richland Campus Band Director, conducting it.  Jon W. with A&M Barns & Gazebos was the supervisor of the construction.  Funding for the project was community wide through Southwest Partners with special matching funding provided by the Joan Woodman Orton McCollum Foundation.  Joan Woodman Orton McCollum was a devoted community donor and collector of buttons, clocks and rural school houses, died in 2008 at the age of 96.
Events at the Pavilion are handled by the Richland Center Parks and Recreation Department.  No events are scheduled for 2021.