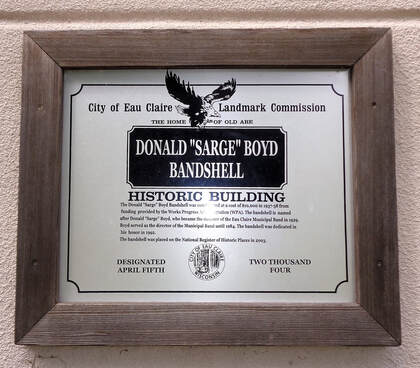 7/25/2018; Signage on the side of the bandshell
Much of the following information is summarized from the WI Historical Society, Division of Historic Preservation, State Register of Historic Places Certification Form

​The art deco style Donald "Sarge" Boyd Bandshell was built in 1938.  It is located on the 11 acre Owen Park which is on the west bank of the Chippewa River.  In 1935, the city engineer, Alex Garnock, thought there should be a permanent bandshell for the municipal band.

The Eau Claire municipal band was led by Donald I. Boyd for many years.  He had come to Eau Claire as the High School Band director in 1929; he loved music, and it overflowed into his organization of the municipal band, which flourished under his leadership.  The first Owen Park concert was reported to be on June 2, 1932, with Mr. Boyd as the director of the band.  The bandshell debuted on June 16, 1938.  It has played regularly at the park since then.  Mr. Boyd remained director until 1984 and passed away in 1985.  In July 1992, the bandshell was rededicated and renamed in his honor.

The bandshell cost was approximately $10,000 with funding for most of the labor costs coming from the Works Progress Administration (WPA) and the remaining from local funds.  There is permanent wooden bench seating for 1,500 people. The bandshell was listed on the National Register of Historic Places in 2003.  One of the highlights of the bandshell was, and still is, the electrical lighting system - indirect with light bulbs as well as neon light of varied colors, all controlled by the band director from center stage - this took up much of the budget.

Some improvements have happened over time.  In the early 1970s, the interior concrete risers were covered with wood decking, then removed in the late 1980s. In the mid 1970s, the old exterior stucco was removed and replaced with new stucco.  In 2003 the band shell was repainted and roof repairs made.
Concerts by the Eau Claire Municipal Band plays regularly starting on Wednesday June through July
​at Owen Park's Donald "Sarge" Boyd Bandshell.
​On Memorial Day and Veterans Day, patriotic events have been held.
Festivals and fairs have taken place at the Park using the bandshell as a center piece.