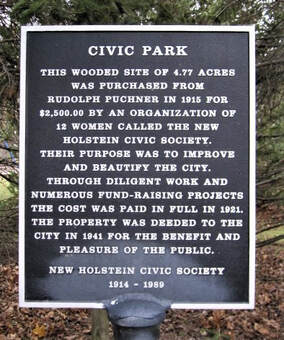 Located in Civic Park, the bandshell was built in 1991. The structure was built by Roehrig & Savola Builders, Inc., a local construction crew and utilized some volunteer labor by New Holstein Fire Department members.  The approximate cost was $12,509. The cedar structure is 32 feet by 20 feet and the floor is elevated 7 feet and has back steps.

4/18/1991, "The New Holstein Reporter"
Funding for the project was provided by the Edmund J. Arps Memorial Fund.  Mr. Arps was born in New Holstein in 1891 and passed away at Oshkosh in 1970.  He was a 1913 graduate of the University of Wisconsin with a degree in electrical engineering.  Mr. Arps worked for Commonwealth Edison in Chicago until 1933 when he moved to Oshkosh and founded the Duo-Safety Ladder Co. and served as president of that company from its inception until his death.  (Mr. Arps was an ardent supporter of the University of WI football, and, since 1909 when he enrolled, had not missed a University of Wisconsin Homecoming.  The 1959 UW homecoming was his 50th successive attendance.  The UW won the Big Ten championship that year and earned the right to play in the Rose Bowl against the University of Washington, but unfortunately did not win the contest.  It is unknown how many more homecomings Mr. Arps attended after 1959.)

It was used for the first time on July 12, 1991, by rock bands who played as part of the entertainment for the annual New Holstein Firemen’s Picnic.  The bandshell was a major improvement because in past Firemen’s Picnics, the bands played at ground level under a tent.

Since being built in 1991 the band shell has housed entertainment at all of the successive Firemen’s Picnics in addition to serving as the location of various other functions.