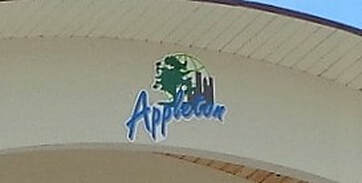 Signage at the top center of the bandstand
The 38 acre Pierce Park  was established in 1920.  According to information from McMahon Architects, in 1926, Chicago architect Byron H. Jillson designed the interior "dance" pavilion and the exterior original bandstand was built about 1944.  It accommodated a 30-piece bands in a turn-table style of 365 square feet which melded into the interior of the "dance" pavilion.

​A prior renovation in 2001/2002 occurred but left major issues with the structure.  A basement was prone to water damage, and the original structure was deteriorating.

In 2014-15, the exterior stage portion was renovated with a design that harmonized with the "dance"pavilion/shelter.  McMahon Architects provided the design and City General Funds of $500,000 were used.

City Band had performed in the space for many years and replacing the stage was critical for its continuation.  Stage upgrades as well as seating area in front to make it ADA accessible were completed.

Concerts are held weekly during the summer and feature City Band. 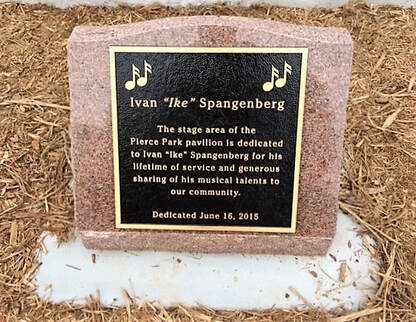 6/16/2015; Courtesy of the City of Appleton
The bandstand was dedicated to Ivan "Ike" Spangenberg on June 16, 2015.  Mr. Spangenberg was the retired conductor of the Appleton City Band. In 1967, "Ike" Spangenberg was named Musical Director of the Appleton City Band and completed his 45th season at the close of summer 2011. He graduated from Appleton High School in 1950, obtained a Bachelor of Music from Lawrence University and a Masters in Music from Northwestern.  Ike shared his love of music with students for 36 years, 28 years at Appleton West High School retiring in 1995. Mayor Tim Hanna declared Tues. August 16th, 2011 Ivan “Ike” Spangenberg Day.