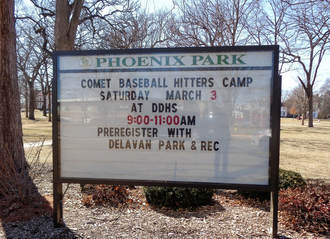 ​Dedicated on June 16, 2007, the Phoenix Bandshell was the culmination of several years of planning.  In 2005, the city council hired Mayo Corporation of Madison to create a master plan for the redevelopment of Phoenix Park which was to include a new bandshell.  The city wanted the design to be in harmony with the historic nature of the neighborhood and in particular with the three historic churches that face the park.  The style chosen was approved  and Roberts Construction began  building it in the fall of 2006 for a cost of $343,368.  It should be noted that the interior wall at the ground level stage is curved to allow for great acoustics across the park.

During the first summer scheduling entertainment was done by the city Park and Recreation Department.  In the fall of 2007, the nonprofit Friends of the Phoenix Park Band Shell was formed to provide, promote, and fund entertainment.

In 2012, improvements were made to the park, including new trees, sidewalks for better accessibility, larger signage, and a colorful dance floor.  The Friends added a food truck, making picnicking easier for attendees to enjoy the afternoon or evening.

​For the past years, there have been free performances, such as spiritual music on Thursday evenings, classical, jazz and pop/rock on Saturday evenings, and folk, country, blues, and ethnic music on Sunday afternoons.
A little history summarized from the Friends website:  Samuel F. and Henry Phoenix, founders of the village of Delavan, donated the 3.28 acre city block site known as Phoenix Park in 1838.  They also donated four sites on each side of the park for churches.  In 1870 a covered bandshell was built in the north-central side of the park.  It was used for not only concerts, but for other events.  In July 26, 1921, William Jennings Bryan, two-time candidate for the president, spoke to a crowd of 1500 citizens.  In 1926, vandals exploded dynamite beneath the floor and badly damaged it.  On December 16, 1948, the damaged bandshell was removed.  Thanks to the Friends of Phoenix Park Band Shell for this information.