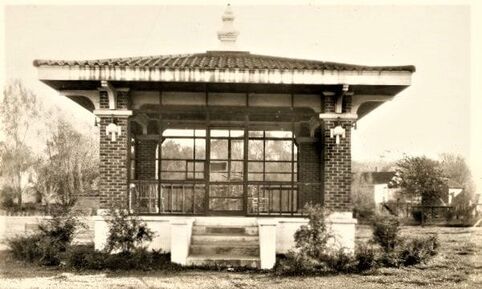 ​In 1926, the James Menhall family donated the building and all costs for the Menhall Band Pavilion.  The designer/architect and cost are unknown.  The Pavilion is located in Edgerton's Central Park with Saunders Creek running through it; an historical footbridge over the Creek connects the two sides of the park.

The Pavilion is used for concerts during the summer.   During 2020, concerts were cancelled because of the COVID-19 pandemic.
The annual Tobacco Heritage Days uses the site, but also cancelled for 2020.
The Pavilion is available to all residents for parties (graduation and birthday) and churches have hosted Sunday services.
Movie nights have also been held.
ABOUT JAMES MENHALL:
James Menhall, originally from Beloit, was in a cigar and confectionery store with his father.  According to University of Wisconsin Digital Library Services, "In 1912 he became interested in trailers and automobiles, and bought equipment sold to individuals.  By different businesses he amassed $50,000.  In 1915 he invested $10,000 in the Warner Trailer Co. in Beloit and became a partner and General Sales Manager.  The Warner Co. manufactured a two wheel auto trailer; a camp trailer called "Prairie Schooner."  Late in 1916 he broke with Warner to start a company on his own.  The idea arose from the thought that a farmer shouldn't have to hitch a team and wagon in order to get a cow or some produce into town.  The result was a small two wagon a farmer could attach to his car for the livestock and at the same time take the family along in the car.  Edgerton was chosen because of available building and machines..."

According to The Hub, May 1917, "Highway Trailer Co., Beloit, Wis., organized $185,000 capital stock by James W. Menhall, to manufacture trailer attachments, has leased the plant and equipment of the Edgerton Wagon Works Co., Edgerton, Wis., and took possession May 1.  Mr. Menhall recently sold his interest and relinquished the vice-presidency of the Warner Auto -Trailer, Co., Beloit, to organize the new company."
​