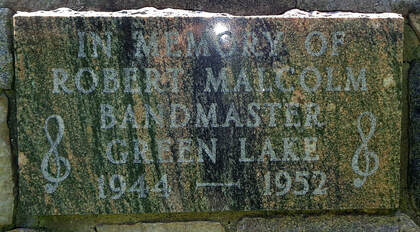 This plaque is located on the planter near the bandshell.
The Starlight Stage is located in Deacon Mills Park on the shores of Green Lake.

​From the Dartford (Green Lake) Historical Society:  The Green Lake High School band instructor, Robert Malcolm, in the late 1940s and early 1950s, led the charge to build the bandshell.   A committee raised the funds over two years after having concerts on the lawn to determine the optimum direction to allow for lighting for the performers and avoid direct sun in the faces of the audience.  The concrete platform was built the first year (1949) of construction and the structure the second year (1950). 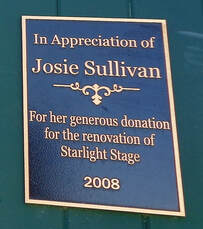 In 2006, the bandshell was threatened with demolition.  Josie Sullivan, a Green Lake resident, stepped up and offered to have the bandshell restored to its original 1950 condition with her donation of the necessary funds to make major repairs, which were done in 2008.  A plaque on the side of the bandshell honors this.


Currently there are concerts on Wednesday evenings in the summer.  Music is also performed during community events in the summer and on fall weekends festivals are often held.