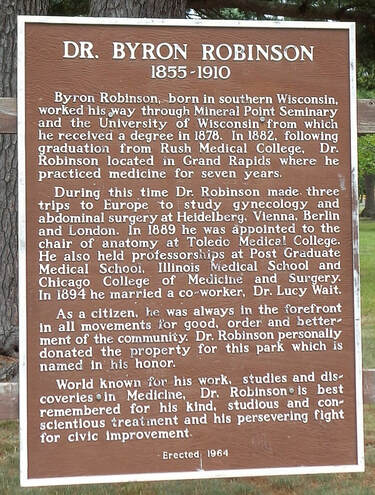 The Byron Robinson Park Bandshell was approved and built in 1957, according the the Wisconsin Rapids Daily Tribune, ​June 6, 1957.  The City Council approved two structures to be constructed - the bandshell and  a shelter adjacent to it for a cost of $23,687 - $11,260 for the bandshell and $12,627 for the shelter.  The electrical contract was awarded to Max Wolfe for $1,383 and the architectural fees of $1,320 went to Rowland Associates.  Both structures were expected to be complete in three months.  The late William F. Huffman Sr. had already donated $4,000 for the bandshell.

The minutes of the City Council, printed in the Wisconsin Rapids Daily Tribune, September 23, 1961, report a letter from William Huffman on behalf of the Radio Station WFHR and the Wisconsin Rapids Daily Tribune.  They wished to donate $3,000 to be used for permanent benching and landscaping around the bandshell.  Mayor Justeson explained that these funds plus additional funds of $3,500 already appropriated in the budget would cover the cost to do this.  The donation was accepted and it was approved unanimously by the City Council to seek bids and begin construction in the 1961 fall season.

In 2009, the Labor Day Committee, consisting of local Labor Unions, improved a gravel area in front of the stage with a new concrete pad by providing the  labor and materials.
​
Free concerts, beginning in June and extending to early August, are performed by the City Band, which celebrated its 155th year in 2018.