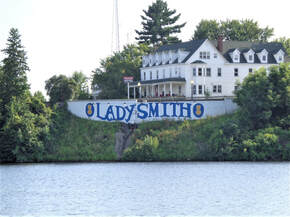 8/13/2020; the Flambeau River flows along the border of Memorial Park
To commemorate the International Lions Club 100 years of service, the Ladysmith Lions Club, 50 years old, proposed the building of the Legacy Amphitheater.  In 2016, it sought and received approval from the City of Ladysmith Park Board and the City Council to move forward and explore this possibility.  The site selected was in Memorial Park, located along the Flambeau River, that had a natural bowl topography - ideal for such a project.
​
Morgan & Parmley, a local engineering firm, with input from the Park Board, the Ladysmith Lions Club, and Rusk County Wildlife Restoration Association (WRA) designed the bandshell.  The tiered, semicircular on-the-ground seating has the capacity for 500 to 600 people.  Jerry Carow, with WRA, designed this and it was constructed by the WRA as an Environmental Challenge Project.  Most of the work was done by volunteers with both the WRA and the Lions providing the "lions" share of the work.

The total cost was $200,000-250,000.  The City contributed $25,000 towards electrical and lighting as well as some labor  The Ladysmith Lions Club raised over $182,000.  Other donors were sought through a fundraising campaign.  Plaques honoring donors are posted on a fence next to the bandshell. 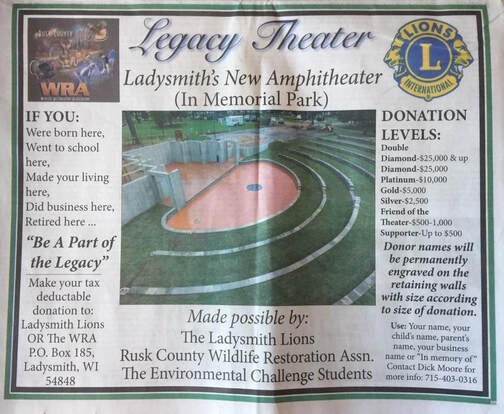 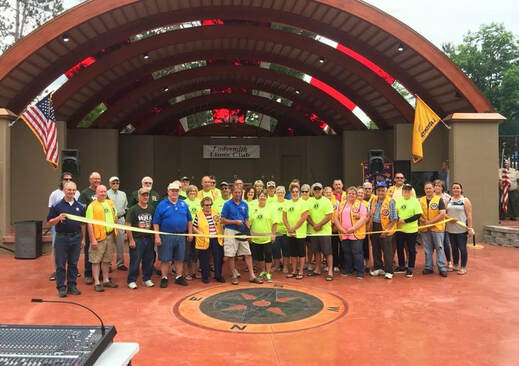 6/8/2018; Ribbon cutting on June 9, 2018; Courtesy of the City of Ladysmith
​
​In the spring of 2017 ground was broken and on June 9, 2018, there was a dedication with a ribbon cutting.  As reported in the Ladysmith News on June 13, 2018, the greater Ladysmith Area Chamber of Commerce hosted the event.  The introduction included current Ladysmith Lions Club President Curt Pratt and and invocation by PCC Sam Kochel.  The national anthem was sung by Vanessa Hoefs and local historian and former Ladysmith News Editor John Terrill presented the history of Memorial Park.  Various speakers praised the new amphitheater including WRA President Jerry Carow, International Lions Past International Director Mike Molenda, Past President of the Ladysmith Lions Club Dick Moore, former Ladysmith Park Board Chariman Carol Huiras-Rozak, and WI Assembly 87th District Representative Jim Edming.
Besides musical concerts, the amphitheater has been used for worship services, outdoor movies, and memorial services.
​It is available through the City for any number of events or gatherings.