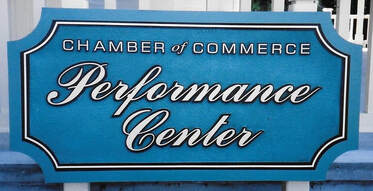 The Chamber of Commerce Performance Center is located in a city park on Stephenson Island (formerly Stephenson Isle) which is an uninhabited island in the Menomonee River.  The island can be reached via the River Walk Bridge which is next to the WI Tourist Information building and the Stephenson Marinette Public Library.  The island is named for Isaac "Ike" Stephenson who was a successful lumber businessman and elected to the WI state assembly and also to both the US Congress and Senate.

Currently, Sunset Music in the park are held one evening a week during the summer.  As one Chamber member said:  "It is most stunning in the early evening when swans and geese and ducks are paddling about and the sun is setting."