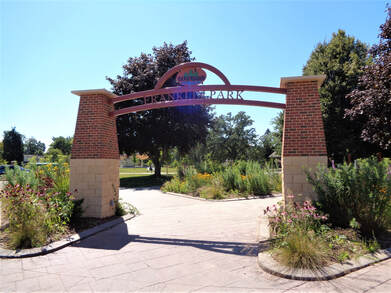 8/2019
Franklin Park Amphitheater was built in 2018 at the three acre centrally located Franklin Park, so named because it was home to a public school that many in the community attended.  Ayers and Associates designed the park and amphitheater.  The cost for the entire park was $1.3 million and best estimates for the Amphitheaer portion is in the range of $250,000.  The cost of it was funded via a Parks Referendum passed by the Shawano Community in 2017.  Private donors/foundations also helped to support the park project.

In 2013, the City of Shawano conducted a Comprehensive OutdoorRecreation Plan.  As a part of it, a survey was done by the City which identified what residents desired at Franklin Park.  Out of the survey, a master plan was recommended for Franklin Park to include "Creating this area into a public gathering center for events like the farmers’ market, etc.   A gazebo or band shell could be added as well as to showcase the city center.  A central water fountain would add to aesthetics with flower beds and walkways.   An outside swimming pool could be a possibility but other areas such as Wolf River Park should be looked at first, as well as a new splash pad at Memorial Park."  This process was a multiyear project with many options to be considered.  The City worked with several design firms to show how it might work.

Currently sponsorships help provide entertainment at the Amphitheater.  In 2019, the Menomoniee Casino Resort was a gold sponsor for Thursdayz@Franklin.  Most likely, sponsors will vary year to year.  Other events have included a hypnotist, movies, and community events such as neighborhood association annual picnics, Halloween events, Shawanofest, and Christmas tree lighting event.
OTHER PARK FEATURES
​
On the west side of the Park, one happily stumbles across a charming sculpture of Linda Grams reading to a boy; she was a librarian at the county-city library for 28 years.  Her husband, Mart Grams,  as a lovely tribute to her, designed it and had it commissioned after her passing.  Alibaba (China) created it from numerous photos submitted to them of her and it was donated and placed at this spot in 2018.  Linda is often adorned with hats or scarves and it has become a favorite spot to read or for photo opportunities.  In the spirit of reading, a Little Library has been placed next to her.  A local gardening club maintains the garden around her.