Rotary Performance Pavilion at Hart Park
The Rotary Performance Stage's first concert was held on June 24, 2009, at Hart Park.  Impetus for the performance stage started about 2000.  At that time, concerts were held at various parks throughout the community.  Hart Park was also undergoing a renovation after devastating floods in 1997 and 1998.  At that time, some 64 properties in the Menomonee River corridor, which had flooded, were removed and the Hart Park's size was increased  from 20.34 acres to 53.16 acres.  Thus, new areas were open to more amenities to the Park.  One such idea was a permanent performance venue.

$1 million were committed by the Wauwatosa Rotary Club and the Mayfair Rotary Club of Wauwatosa to develop the pavilion.  They raised the funds, oversaw the design, and hired the contractors. They worked with the Zimmerman Architectural Studios who designed the performance stage after a considerable amount of research of similar facilities.  It was built to handle a variety of talent, from small groups to larger groups such as local school bands; even larger groups such as symphonic orchestra can be accommodated.
Tosa Nights  (volunteers who formed a nonprofit) has offered free concerts each summer
since 2000 through a partnership with many local businesses.
Many local sponsors including Waterstone Bank, Froedtert and the Medical College of Wisconsin, and the Wauwatosa Rotary Clubs to present entertainment.
​Concerts often feature local talent, but this has also expanded to include national and international groups.
The Plan for Hart Park:  The bandshell is located at the right center of the rendering. 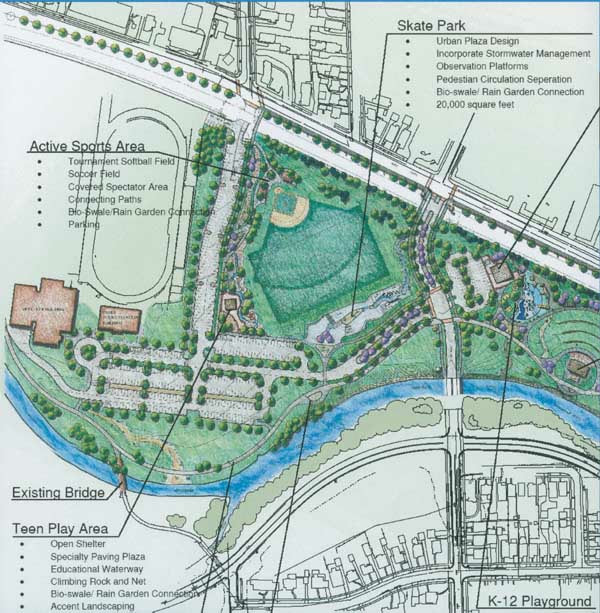