Gehl's Performing Arts Pavilion at Firemen's Park
The idea of the Pavilion began in 2008 with a meeting between the Village of Germantown and the Germantown Kiwanis.  According the John Krause, Sr., of the Kiwanis, the idea had languished until 2012 when Kiwanis appointed a committee to move it forward.  The goal was to fund and construct the Pavilion, and, upon completion, gift it to the Village.  Germantown resident, Brad Kropp, affiliated with Perspective Design, Inc., was selected as the architect.  A budget was developed and fundraising began.  Gehl Foods, a family owned year business for over 100 years, stepped forward with a $100,000 donation in exchange for Pavilion naming rights.  In 2015 the Gehl family sold the business, and the new owners, Wind Point Partners of Chicago, committed an additional $25,000.  Other early donors include International Concrete Products, Fibreform Containers, Inc., J W Speaker Corp., Keller Inc., Madden Vanderloop SC, Perspective Design, Inc., and Cars On Line.  The total cost, including monetary and in-kind contributions was approximately $585,000.  Over 500 people contributed to the fundraising campaign.  Along with the major donor names on plaques in the Pavilion, there are bricks engraved with donors' names that are integrated into the construction of the base of the pavilion.

On June 21, 2018, the Gehl's Performing Arts Pavilion was dedicated.  Germantown Village President Dean Wolter accepted the gift from Kiwanis, thanked all the people who came together to support its creation, and then cut the ribbon.  Kathleen Gehl represented the Gehl family and recalled its long-time historical community ties.  She thanked everyone for Gehl Food's success which had over 350 employees and $215 million in sales.  The Germantown Community Band (marking its 20th year) with band director Jim Barnes filed on to the stage and led the community in the "Star Spangled Banner".  The crowd was treated to popcorn, soda, and snacks to commemorate the occasion.

The Village's Parks and Recreation Department maintains the Pavilion and its schedule.  In addition to the Germantown Community Band regularly performing, other musical events have been held, as seen in the 2019 schedule below.  Similar events are will be held in the future.  The Pavilion is available for other events also. 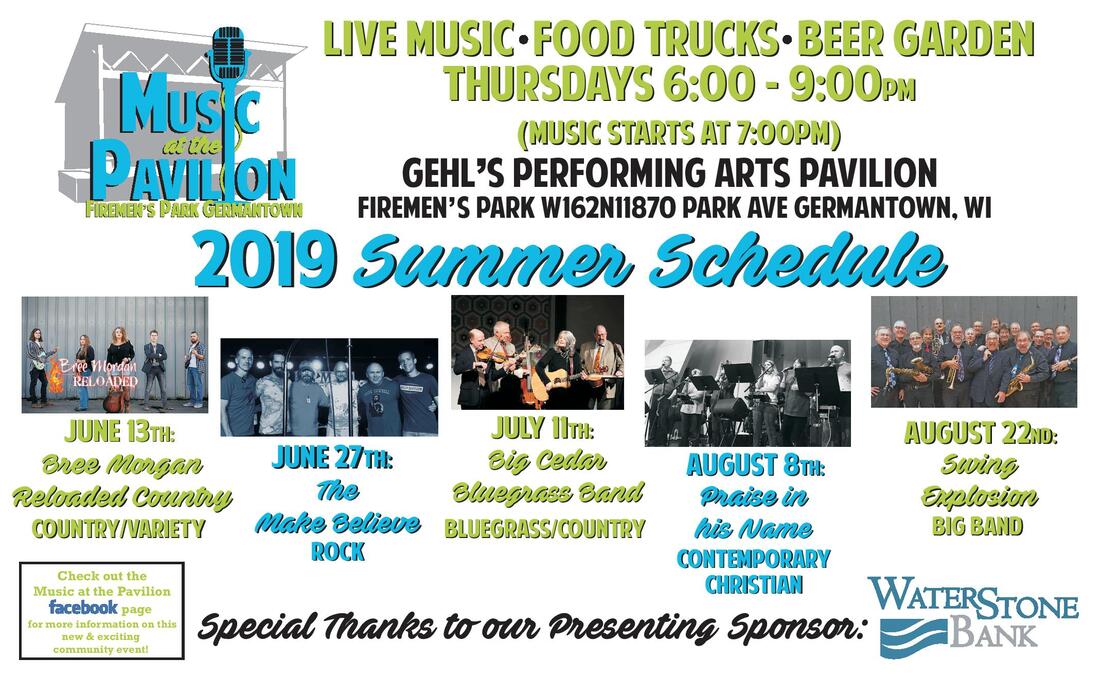