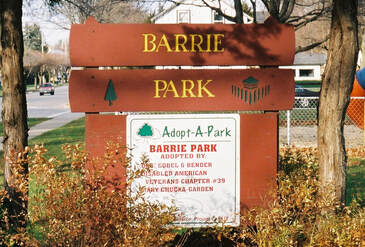 The very distinctly designed "seashell" scalloped edged bandshell is located at Barrie Park, on a one-square city block in an historic downtown neighborhood.  Barrie Park is named after Robert J. Barrie (1818-1876), one of the oldest settlers in Fort Atkinson area.  The park is part of the original Barrie claim made about 1837 when he arrived from Oneida County, NY.

The City Parks Department reports that the original bandshell, designed by Douglas J. McNamee of Fort Atkinson, debuted in June 1972.  It was listed as a fiberglass concave structure with lights at a price of $8,000.  It collapsed in December of the same year due to a snowstorm. The city had not yet accepted  the $3,200 shell as complete and it was covered by insurance.  A reconstruction of it by Joseph Lorenz General Contractors of Hartland for $3,200 began in 1974 and was ready in the same year or 1975.  Improved anchoring to the concrete structure and addition of an anchored I-beam collar that stretched over the front top replaced steel cables that had anchored it previously.  The fiberglass shell is listed as a $4,000 item.

In 2010, the Chamber of Commerce, under its Project 2010 LEAD, undertook in its annual mission to enhance the bandshell.  The interior of the shell was painted; the interior concrete block areas and the exterior foundation were faced with flagstone.  Additionally, a patio composed of paver bricks was added to the front of the bandshell.  An area around the bandshell was landscaped.

This renovation was just in time on June 27, 2012, to celebrate and dedicate the 50th anniversary of the Fort Atkinson Community Band.  John Blahnik, a Wisconsin composer, was commissioned and created  "Party Polka", in recognition of the anniversary.  Every summer, the Band plays free concerts every other Monday evenings.  The musical programs vary from folk music to marches, Latin rhythms, big band swing, or Broadway medleys.  At times, guest artists or groups are invited to play as part of the evening event.

In 2013, restrooms were added.  From the June 14, 2013, Jefferson County Daily Union:  "Fort Atkinson Park and Recreation Director Scott Lastusky said installation of the restroom totally changed the idea of what can go on in the park.  It was the restroom facilities that, in part, prompted creation of the Fort Atkinson summer Charity Concert Series."  Funds raised from these concerts help various nonprofits and scholarships programs in the community.

At one time, plays were presented; however, it only lasted a short time and were discontinued.

Often, an ice cream social, held as fundraising activity by local groups, precedes each evening concert.  Folding chairs are set up by the city's park department in front of the stage; others are content to set up their own webbed aluminum or canvas bag chairs, or spread their picnic blankets on the grass.  Each concert attracts approximately 300 to 400 people.  As the twilight sky gives way to evening darkness, interior lighting beautifully enhances the bandshell design. 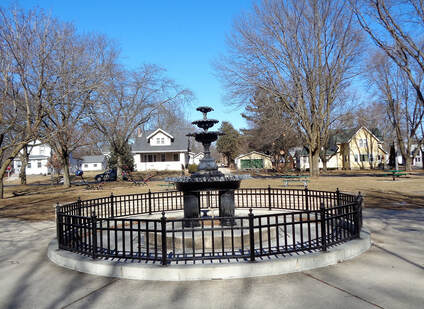 The restored landmark fountain dedicated to Allan Haukom.
​
In 2008, a restored landmark fountain was unveiled and located at the center of the park.  It was dedicated to a local Rotary Club late member Allan Haukom. In 1903, it was installed in Jones Park as part of a swimming dish (wading dish) that was filled and drained daily.  It was later moved to Lorman-Bicentennial Park as a decorative fountain, and stored in 2003 until its restoration in Barrie Park.. An extension to the fountain and legs were added, but the remainder of the fountain is over 100 years. (Thanks to the City Park Department for this information.)