Echo Park Bandstand
All infomation and news articles have been provided by the Burlington Historical Society.

As early as September 1934, the Harmony Band of Burlington had decided to have concerts to raise funds for a new bandshell to be built in Echo Park.  In November 1934, one concert was held at the high school auditorium.   The new one would apparently replace a bandstand already in the park, as the May 26, 1939, Standard Democrat indicates  - no further information could be found about the original one.

In April 1939, as reported in the Free Press,  "The Burlington board of park commissioners ... has also decided to procure plans and estimates for the construction of a bandstand at Echo park to replace the present structure."

The Standard Democrat, May 26, 1939, reports that "at a meeting of the Burlington park board, L. R. Mangold was awarded the contract for a new band stand in Echo Park on his bid for $1,574.  Plans for the new stand call for a hexagon shape building thirty-six feet in diameter.  The foundation wall and flooor are to be re-enforced concrete, with supporting wood posts for the roof.  An iron railing surrounds the floor.  The stand is to be erected near the site of the old bandstand and the floor is to be high enough to provide large rooms underneath which can be used for dressing rooms for bathers in the summer and a storage place for benches and park equipment during the winter months.  The old Roper house in the park is to be razed and the old band stand are to be razed and what material is available used in the new structure.  Plans for the stand were approved by the state.  Work is to be completed withn thirty days so the stand will be ready for the July Fourth Jamboree.

It was on dedicated on July 16, 1939.  The history and its program are described in the Standard Democrat,  July 14, 1939,
Photos Through Time
Courtesy of Burlington Historical Society 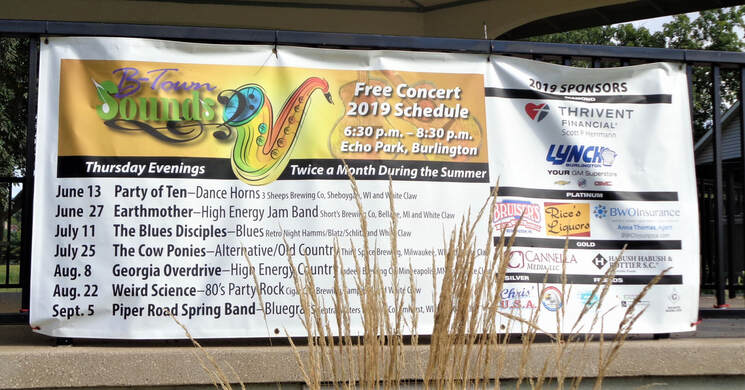