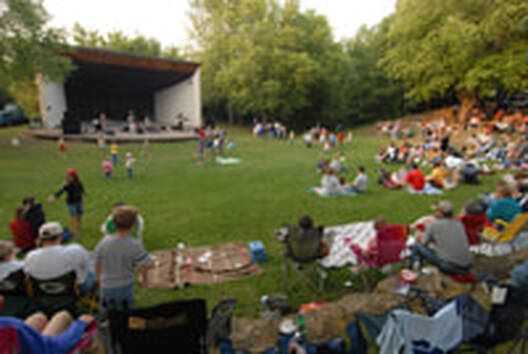 Image from https://www.uwrf.edu/AboutUs/Buildings/MelvinWallAmphitheatre.cfm
It was the vision of Professor Melvin Wall (chairman of the plant and earth science department in the College of Agriculture and head of the Campus Planning Committee) to develop the southern part of the campus, known as South Fork.  This area had proved to be unsuitable for any future building.  Prof. Wall had traveled with his wife to northern Italy and was charmed by amphitheaters built in the Greco-Roman style; he thought that one on campus would be a great asset for the university.  When he presented this idea, others at UW-River Falls were enthused and the development of the amphitheatre with its surrounding South Fork area began.  It was to be the only amphitheatre in Wisconsin's universities and one of few in the country.

The dedication was held in 1972 with the Minnesota Orchestra performing.  Unfortunately Dr. Wall was not there.  In 1967, he was a member of an eight-man survey team in Vietnam studying its higher education system.  The plane they were traveling on was caught in a storm and crashed into a mountain north of DaNang in March 1967.  All persons aboard were lost.  Dr. Wall was granted the Distinguished Alumnus Award posthumously at the 1967 commencement.  The amphitheater was named in his honor.

No concerts have been scheduled in the 2021 season.
TIMELINE OF DEVELOPMENT
(Information courtesy of UWRF University Archives)
June 1963:  The Campus Planning Committee met and determined that development of the South Campus could not be used for any building  sites and that the 35 acres should be developed into a park-type arboretum.  The Student Foundation Committee selected the area as a student project for 1963 and contributed $1,000.  That plus other funds were used for a skating rink at the first of a 10 acre portion; the remaining 25 acres were to be developed later as funds became available.  (From Campus Planning Notes)
​​
October 1963:  Additional work was completed for the site.  Lankso's Lake was created, additional grading was done, and a pump was located to fill the lake with the intent to be completed by Student Foundation week.   (From Campus Planning Notes)

Fall 1964: The Student Foundation decided to have a fundraising campaign for the construction of an outdoor amphitheater which would help (1) be a place for pep rallies, auctions, kangaroo courts, music, festivals, etc. and also (2) be a place for guest lecturers, symphonic orchestra concerts, summer theater presentations, choral and band concerts, convocations, and graduation exercise.  The Foundation's members were composed of seniors, juniors, sophomores, and freshman.  Its mission was to "promote and foster the school spirit and Reputation of Wisconsin State University-River Falls...To prepare students...to take an active role in alumni activities...To serve as a liaison and co-ordinating group among students, faculty and alumni...and to establish a student foundation program in support of he developmental program of the University."  It was estimated that $2,500 would be enough to build the shell of the amphitheater.  Events planned for Foundation Week would raise these funds. (From notes of Melvin Wall and also reported by the "Student Voice" , 9/28/1964)
​
March 1965:  A week long fundraising event, Foundation Week, was scheduled with the goal to raise $2,000 for the amphitheatre.  The funds would be used for a 60x40 foot stage with lighting and sound.  A plaque would be engraved with the name of any group contributing $25 or more. The proposed model of the amphitheatre built by Bob MacGregor along with blueprints of it and other information was displayed in the Student Center.  Events included a skit, an auction, Faculty Frolics which presented a melodrama titled "Deadwood Dick", and the Ugly Man on Campus contest.  (As reported by the "Student Voice", March 15, 1965.)

May 1965:  The Foundation, with chairman Harvey Stower, reported that $2,000 had been raised for the amphitheatre and it would be ready by the fall.  The stage area was laid out, banks cleared off, and dirt fill was put in.  Plans for the stage are being directed by Dr. Melvin Wall, overall project director. (As reported by the "Student Voice", May 24, 1965)
Drawings of Amphitheatre; courtesy of UWRF University Archives