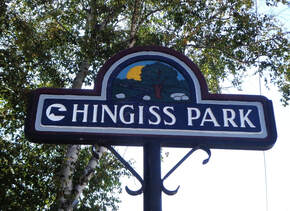 8/10/2022
In 1966, the City Council approved plans for the Pavilion at Hingiss Park and it was dedicated in 1967.  This large eight-sided stand with a concrete base was the original home of the Kiel Municipal Band, a mainstay in the community since 1938.  It is named after its second director Dr. Edgar P. Thiessen.  A sculpture was dedicated in 1978 to commemorate the Kiel Municipal Band's 50th anniversary.

The Band played regularly until 1989 when it moved most of its performances to the new bandshell in 1989 in City Park.  The Band left for a more acoustically pleasing space and one without the mosquitos which annoyed not only the Band but the audience.  Occasionally, the Band plays concerts at this location.

Other additions occurred in the Park over time:  a 1969 expansion with the purchase of the Hein property; in 1984 a new shelter built with a Band concert to dedicate it; in 1984 a new restroom; and in 2001, a ramp for the shelter.