Les Paul Performance Center
The Les Paul Performance Center is located in the 5.77 acre Cutler Park, in the heart of the City of Waukesha.   The park is one of the oldest of City parks with the feel of a town square.  Besides the Performance Center, there is the Waukesha Public Library, a parking lot, a grouping of historic Indian mounds, and playground equipment.  ​
In 1963, it was moved west  to make way for a new library addition.  There was controversy at the time whether or not to move it or tear it down.  Residents nearby had complained of the noise and its appearance.   However, it remained and since 1945, the Waukesha Civic Band has provided weekly summer concerts and given much pleasure to the community.

In 1988, the Cutler Bandshell was renamed the Les Paul Performance Center.   From Sue Baker, Program Director of the Les Paul Foundation:  " Les Paul was born in Waukesha, attended the school across the street from the park, that now bears his name. He is the only person in both the Rock and Roll Hall of Fame and the National Inventors Hall of Fame. Les Paul, the Wizard of Waukesha, is well known for his invention of the recording and performing techniques that changed modern music.  He also is known as the father of the solid body electric guitar.  Teenage Les Paul, known then as Rhubarb Red, performed in the band shell that now displays his name.   Les Paul is buried in Waukesha’s Prairie Home Cemetery, located less than two miles from the band shell."  There is a permanent exhibit at the Waukesha County Museum which celebrates his life.

In 2015, there were renovations including better handicap accessibility, new audio video lighting systems, side "wings" expansion; in 2016, new back lit gable signage was added.  Renovations were funded in part by the Les Paul Foundation.

Today, as in summers past, the Les Paul Performance Center attracts a large audience and offers several nights per week of activity from Monday night movies to civic band concerts (the civic band formed in 1945) to Tribute Tuesday Concerts night.

The above are from the Waukesha County Historical Society which created an exhibit in 2004 honoring Les Paul.  The one to the left is of Les Paul as a youth; the second describes the exhibit. 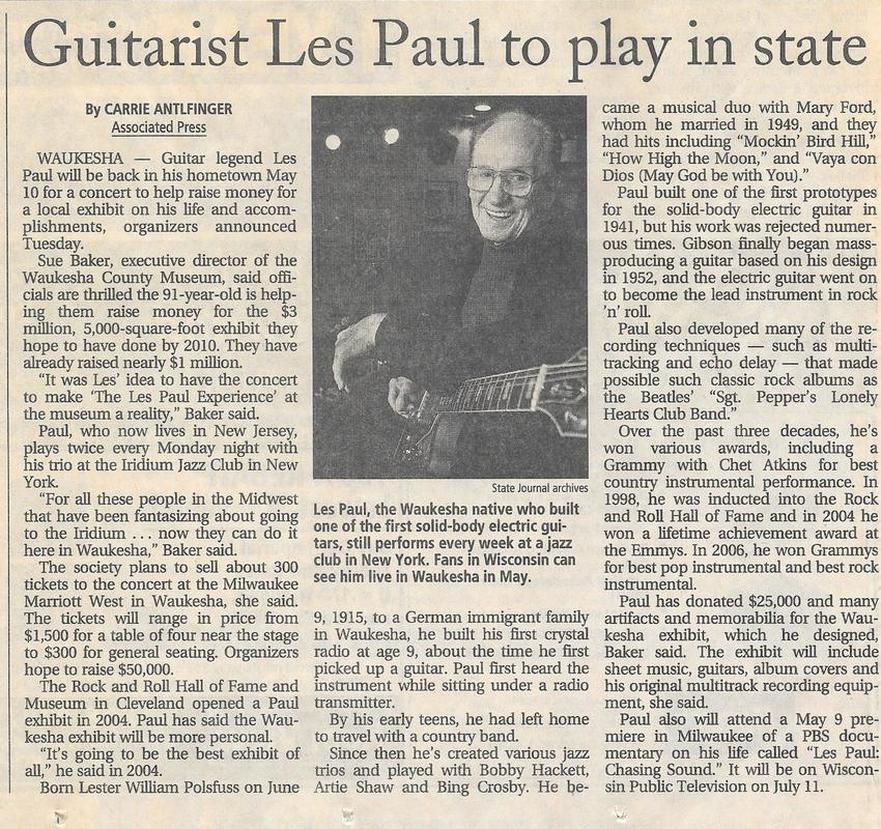 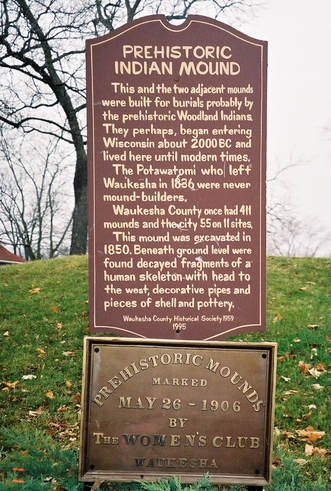 ​Cutler Park was purchased by the City of Waukesha in 1899 for $30,000 from Mr. Morris Cutler, the first settler from the East who had located his homestead there.   After much discussion, it was determined that the about the cost would be greater if put off too long, so the City purchased the site.  It was anticipated that the property would be needed for a future library and city hall.

Located within the Park are prehistoric Woodland Indian mounds dating back to 2000 BC.

Also, the famous "Railsplitter" is located within the Park along with another historic canon.  The "Railsplitter" is a bronze cannon of the Civil War era and was retired in 1922 from active participation in community affairs.